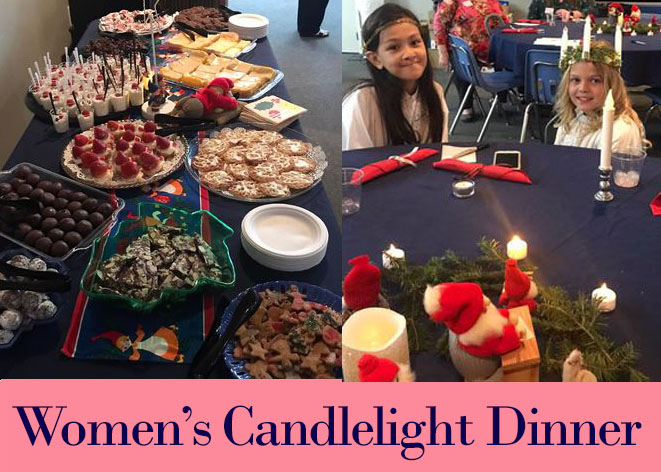 Ladies, are you looking for a special night out? Why not join us for the Ladies’ Candlelight
Dinner on Thursday, December 8 from 6-8 p.m. in the Fellowship Hall?
This Scandinavian-themed dinner started a around five years ago to celebrate St. Lucia Day,
which is December 13. The legend of St. Lucia takes place in Sweden, where a wealthy woman
(who was a widow) had a daughter named Lucia (which means light) who prayed for her sick
mother to be healed. Lucia promised God that if her mother were made well, she would devote
her life to God and never marry. The family would then give her dowry to the poor. When her
mother recovered, she supported Lucia’s decision, but Lucia’s fiancé didn’t. He wanted Lucia
and her money, so he reported to the government that Lucia was a witch and had her executed.
After her death, a ship carrying a maiden &quot;clothed in white and crowned with light&quot; appeared on
the shore in the Swedish province of Varmland during a great famine. The maiden, widely
believed to be Lucia, distributed food and clothing to the needy, thus endearing herself to the
Swedish people.
In honor of that tradition, at LCC we have a young lady each year to dress in a St. Lucia
costume, which includes a crown of lights. This “St. Lucia” helps at the dinner.
The menu reflects the Scandinavian heritage of open-faced sandwiches which the women of the
church prepare. “It takes lots of help to prepare the food and decorate the Hall,” organizer Lorna
Reed said, “but it’s a lot of fun, too.” Normally this event draws 40-50 women of the church
together, so it’s a great time to get to know each other better.
Women who attend are asked to bring a donation of a gift box of personal care items for the St.
Pete Free Clinic Women’s Shelter. Think perfume sets, lotion sets, etc.
All women of the church are invited to this fun-filled, free event. Please RSVP at the table in the
narthex, if possible. Hope to see you there!

Lutheran Church of the Cross, 2021